Posted by Miss Salsabila at 9:17 PM 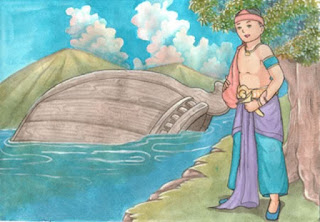 THE PRINCE AND HIS BEST FRIEND

Once open a time,there  lived a kind young princed named Jonathan. He was loved,and adored by his people. His two close friends were peter piper,the servant of the palace and Franklin Greedy,the son of an Aristrocrat.

One day, The Prince,Peter Piper,and Franklin Greedy were walking through the forest. Suddenly a group of  bandits attacked the three boys near an old house. They entered the old house and blockaded the gate and doors. The three boys were trapped inside the house.

Franklin was very terrified and asked the Prince to surrender immediately,but Peter was not afraid. He urged and supported the prince not to give up. The Prince decided not to surreder because he reliased that he would become to his father,but Franklin was scared and wanted to make a deal,it made Peter suspicious about Franklin’s behaviour. So he quietly made up a plan for him and the Prince to escape.

Early at dawn,Franklin opened the front gate and unloced the doors. The bandit’s entered the house in search of the Prince was supposed to be sleeping,no one was there. Suddenly they heard a horse running outside the house and saw over the window that Peter Piper and Prince were riding away on one of the bandit’s horses.

It turns out, Peter Piper sneaked out of the house and waited in the yard,while the Prince was hiding behind the house. The bandit’s were very angry at franklin and took him with them the Prince and Peter went safely going back to the Capital.